An initiative to push all middle school students into algebra – the better to prepare them for college – did not have outcomes matching the high hopes for it, according to an academic study. 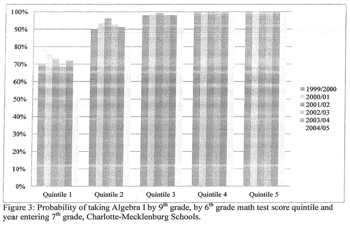 A table from the study.

“The Aftermath of Accelerating Algebra: Evidence from a District Policy Initiative” was published earlier this year by Prof. Charles T. Clotfelter and others at Duke University. The full study is here.

While much of the study focuses on Charlotte-Mecklenburg Schools and the algebra effort of then-Supt. Eric Smith, the authors say similar results were found in efforts by Guilford County public schools to push more low-performing students into algebra.