Things are looking up for America’s children. Or so it might seem.

A wheelbarrow load full of data was delivered Dec. 16 by Duke University’s Center for Child and Family Policy.  The Center’s Child and Youth Well-Being Index tracks 28 sets of data about children. Some of the data sets go back to 1975. That means the data bears on both today’s children, and most of their parents.

Lots is going right, according to the study. There are fewer violent crimes against children. Suicide, smoking and binge drinking are declining. There are more bachelor’s degrees, more preschool, slightly more high school graduations.

Lead author Kenneth Land, a Duke sociologist, believes the 1990s low point for child well-being was fueled by job losses in manufacturing, an increase in employment among women, and a simultaneous rise in single parenthood. Things are better, Land says, because “social institutions” have picked up some of the slack.

The Duke synopsis of the report’s findings says test scores are “on the rise. Overall, test scores for U.S. kids are up slightly since 1975.” But it points out that “the gains are much stronger in elementary and middle school.” That’s happy talk: The report itself notes that, since 1994,  “the age 17 (modal grade 12) scores have flat-lined during this 20 year time period.” 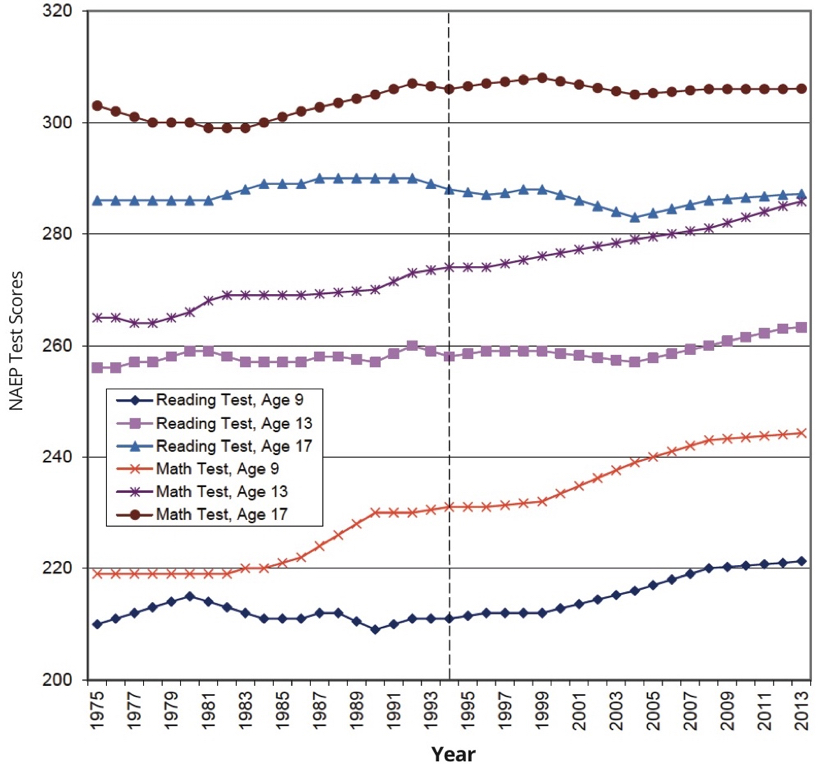 Above is the graph that tracks scores on the National Assessment of Educational Progress. The results are far more reliable over time than, for example, scores in the North Carolina testing program. That’s because the state tests change regularly, and proficiency standards get stiffer or more lax with the political winds. NAEP scores are the gold standard.

NAEP doesn’t test every child in every school, or even every year. But in a long-term study like Duke’s, trends are still apparent. And what does it show?

The increases in scores in both math and reading are among third- and eighth-graders. It is the 12th-grade lines that led the Duke researchers to write about flat-lining.

It’s as though all the education reform that has induced test-score gains, if not real education, at the lower grades had no corollary in high schools. Or is it that the culture in which many of America’s teens come of age is so focused on hormones and two-finger social communication that anything more difficult has a hard time indeed competing for their energy and attention? If so, that is worrisome, both for the teenagers and for the adults around them.